At HASHIGO ZAKE, the craft beer bar in Wellington. They had an event to sell Rogue Voodoo Donuts Maple bacon Ale with Maple Bacon donuts.
They asked me to make 50 maple bacon donuts. 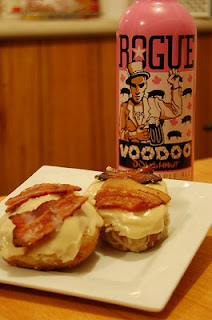 Problem.... I have never tried that donuts before. I could not imagine maple syrup and bacon taste together. If you are in Oregon State, you have tried it.
I have tried that beer before. It was sweet like maple and smokey.

Anyway I tried to make the donuts. I looked up recipe and photo on Internet.
That is photo I made it at first time. I brought them to the bar to try. 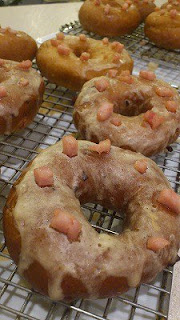 I needed to put more bacon and maple to improve them. 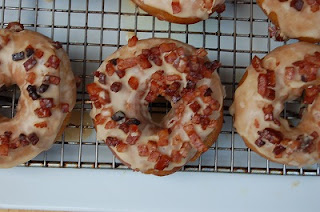 I thought it was much better than before. But still they wanted to put more bacon to make it smokey.
But I needed to change the shape to make it like the original.

Finally I could make the recipe for beer donuts. 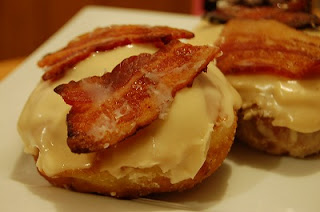 I found a interesting item. 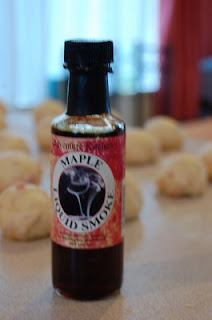 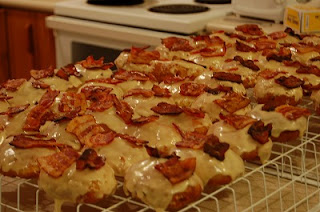 I write down recipe below. But if you want it to match with the beer, you can add some smokiness to the donut.

1. In the dough mixer bowl, Put the ingredients except butter and diced bacon.
Knead it 8 minutes until it becomes smooth.
Add butter and knead it till butter combine well and get elastic and smooth.
On the floured counter, combine the dough and diced bacon, knead it until it is completely combined.

2. Put it in the container and put cover. Place it at the warm place (30℃) for 1hour until it becomes double size.

3. Meanwhile cook the slices of bacon with frying pan until it gets crispy.
Cool it down.

4. Pour the dough on the floured counter, Deflate it and divide it into 5 pieces. Make them rough ball and rest them for 10 minutes.

5. Make them oval shape. Pat them your palm and make them flat lightly.

6. Poof them at room temperature for 1 hour.

7. Heat oil in the deep fryer or deep large, heavy sauce pan at 180℃.
Slide donuts in the hot oil, fry them each side until they become bigger and golden brown.  Remove them on the wire rack to drain oil.

8. Cool them down.
Meanwhile, make glaze. In a bowl, combine icing powder sugar and 2 table maple syrup, put a table spoon of water at a time until it become smooth but not watery. It was quite thick.

9. Once the donuts get cool down, dip them into the glaze. Top the bacon on top. Cool them down. 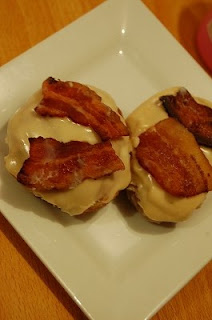 It is placed at Yeastspotting.

Makoto
New Zealand
Hello. I m Makoto from Japan. I have lived in Wellington and Auckland. Now I live in Tauranga with my family. I enjoy baking bread and making homemade things. 2010年4月よりＮＺ首都ウェリントンにてワーホリ。ワークビザのち永住権取得。2016年からオークランドに移り住みました。長女出産のち2017年にタウランガに移り住みました。2020年長男出産。 自分で作れるものは出来るだけ自分で作ってます。WellingtonとAuckland時代はカフェでBakerとして働いていたので料理好きです。趣味、石鹸、洋裁、編み物。 専業主婦のかたわら、自分で作れるものはできるだけ自分で。洋服、みそ、パン、石鹸などなど。ビールと蒸留酒は旦那が担当。